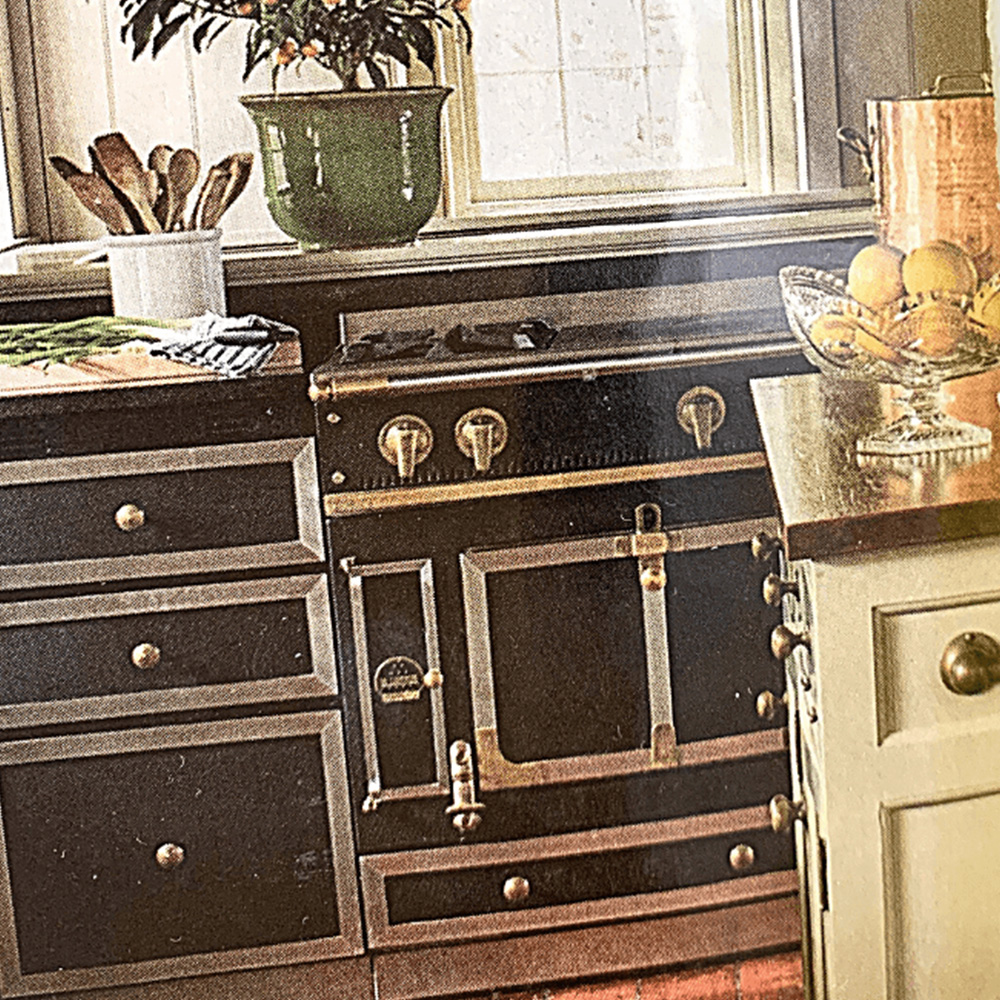 I saw it in a picture in Southern Living and I was smitten. Just smitten. This beautiful black stove with steel and gold accents. Two large gold knobs to open the oven doors. Drawers beneath the doors accented with divine detail. It was like a piece of art or furniture. It’s made in France so when you look at it you immediately start conversing with Julia Child.

“Julia, how exactly do you make that Beef Bourguignon? And why, Julia, must you use 195,000 ingredients in it?” She chuckles at you and then goes back to cooking.

This is what you experience just by looking at this range. Then, I saw the price tag. I went from smitten to staggered in 0.5 seconds. It was the price of a car. I lie not. A car. A luxury car. But it helped me determine that even if I couldn’t have that stove, I knew I wanted a black stove.

Packer and I made our first outing to get a head start on picking out appliances before we headed to Georgia in a few weeks for the real deal. How hard could it be? After all, I knew I wanted a black, eight-burner range where two of the burners could become a grill pad. We walked through the doors where the Covid table greeted us. You know what I mean. The sanitizer. The masks. But they had gone a step farther. Gloves. The mask I can do. The hand sanitizer has been my friend for years. But gloves? Mandatory gloves? I hoped I didn’t lose Packer because if I did, I may not even recognize her if I found her.

We got there early, before our scheduled appointment to peruse the world of dishwashers and door pulls, freezers and faucets. “You’ve got to see this,” I told her as I grabbed her latex-covered hand to pull her towards the mack daddy of ranges. But on our way, we passed four walls, covered floor to ceiling and back and front of bathroom fixtures. Shower heads, faucets, sprayers, you name it. Everything you know a bathroom needs, and things you would have never thought of hung on those walls. And they were in all different colors and finishes. Matte Silver, Chrome, Brass, Champagne Gold, Oil Rubbed Bronze. My eyes dashed around the walls like I was chasing squirrels. Packer stopped. “What have you decided on for your plumbing fixtures?”

I stopped. Immediately my latex gloves filled up with sweat and my iWatch beeped. I looked down. “Breathe” it flashed. If it had shown my heart rate it would have congratulated me on a phenomenal workout. “You’re stressing me out,” I told her. She chuckled.

Not funny. I thought. “I don’t have to decide that today. Today, we decide appliances.”

I continued with her until I had her standing in front of the La Cornue. Even she gasped. And she is eighty- one. “You are looking at a very expensive article of sheer beauty.” I told her. You haven’t had a house this pretty.” She moved to it slowly and ran her hands along the top of the 12,000 BTU burner. 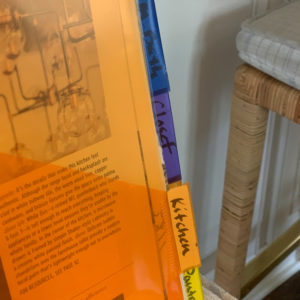 I walked around her as if we were on the showroom floor of a car lot. “Two electric convection ovens, each with French side-swing enameled-steel doors. One of the ovens actually offers you seven functions, which includes both convection and conventional baking or roasting options, and are you ready for it?” She looked at me, her hand still rubbing the top of the range. “This baby can even defrost!”

“Wow, this is absolutely beautiful,” she said, standing back to admire it.

I nodded my head in full agreement. I reached down to try to open the oven door and I couldn’t. I tugged. It didn’t budge. She gave it a tug. It refused. “Maybe they made it where you can’t open it so no one will mess it up.” We left agreeing that must be the reason.

Twenty-minutes later Cody greeted us with a snazzy, navy-blue, gingham mask. He was smiling beneath it. I started with the La Cornue. He began to tell me about the two different models they had. One was actually the cost of a compact car, but you couldn’t customize your burners with that one. And with the cooking I had in mind there simply weren’t enough burners. So, I continued to convince myself that even the compact was out of the question.

Then came the clincher. “Can you open the oven door?” I asked.

He nodded and gave it a substantial yank. If I had to do that, I’d tear my rotator-cuff again, I offered myself as encouragement. Then, I saw it. The tiniest oven ever! “That’s as big as the ovens are?”

“No wonder, the French are so skinny, they can’t fit any food in their ovens.”

They laughed. Packer added, “And just because something is beautiful, you can still be stupid for buying it.” We laughed harder.

But this was a gift of a moment. You know those moments? The ones where you’ve wanted something for so long, dreamed about it, but knew it wasn’t something you could actually get or should get for that matter. And the knowing of this made you want it more? Like that Porsche? Not that I’ve ever wanted a Porsche, but my friend had one and let me take it to the gym one day and I couldn’t hear myself think in it, and my booty felt every bump and I knew when I crawled out of it that if I had ever wanted one, it was good to know I didn’t even like them. That was this feeling. It was one of such gratitude that I didn’t actually like it. That it wasn’t the function I needed. I like food. I’m southern and my biscuit stone wouldn’t fit in that oven. When your biscuit stone won’t fit in the oven, then child, it is not the oven for you!

Thank you, Father, I whispered.

It felt like such a gift to be able to let that go. I had wanted that oven from the moment I had torn out the picture. Before I knew it was the price of a car. Then when I found out how much it cost, I knew it would never be an option. But human nature likes to know we could have something if we wanted it. But when God shows you that something you want isn’t what you need, that it won’t suit your purposes, that it isn’t best for how He made you, there is a gift in that discovery. A real gift. That is what this moment felt like. A gift. I’ve learned to thank Him for those. I want him to know my heart sees them and appreciates them. I believe with all my heart it gives Him even greater desire and access to show Himself more.

“So, now that we’ve ruled that out, what do you have in black? I only want a black range.” I offered.

He strolled me through the showroom to a navy-blue stove with brushed gold handles. It came in black. He showed me all the different ways I could configure the doors and then he told me it was in my budget. I decided it would work perfectly. Aurevoir La Cornue…

But then he walked me through the burners. They were cast iron burners. If you had spillovers, the spillover would drip down into a pan below and you’d have to pull out the drawer and then pull out the stainless steel drip pan and thus have to clean the two-piece burner along with the drip pan. “But who has many spillovers?” He questioned seriously.

My heart sank. I lie not, one of the statements Philly makes to me most often when he is cleaning up the stovetop after dinner is, “Babe, does it make it taste better if you let the pot boil over first?”

“Um, I have a lot of spillovers.” I confessed.

Packer chimed in. “Denise you really need to think then how much work this will be.”

“Philly cleans my stove,” I announced, trying to convince myself. But deep inside I knew that as much cooking as I do, the thought of having to lift heavy cast iron plates and grates and then clean stainless-steel pans for each and every meal, I’d be cussing that range quicker than I could repent for the cussing I would do. Not the least of which Philly would be repenting.

I lowered my head and mumbled behind my mask that was now making me feel claustrophobic. “Anything else in black?”

Viking makes one in black. He showed it to me. Right then I decided Viking it would be even though it didn’t have the beautiful, brushed gold handles I wanted. At least it was black. Whew, decision made. We moved onto refrigerators and freezers and dishwashers and ice makers and made those decisions in less than thirty minutes. Then I passed this 60-inch Thermador range. Grill. Cutting Board. And not a stitch of black on it. All Stainless. And I stopped. Then they stopped. I studied it. Then I studied it more.

Finally, Cody asked in shock, “Do you like this?”

I was scared to respond. The poor guy had just spent an hour and a half walking me through three different black ranges that I knew I had to have and now here I was stopped in my tracks by one that was well…not black. “I think I do.” I mumbled. Kind of like Dan In Real Life to the police officer after being pulled a third time.

By this time, I was thoroughly exhausted. So were they. “I need to go home and think.”

Cody shook his head. Kind of in that I think I need a drink, way.

Packer and I left the store and discarded our gear. My gloves had slipped off my hands somewhere into the first hour. We climbed into the car, and I leaned my head back in exacerbated exhaustion. “Packer, I just don’t know if I get stainless that would be too many metals going on in the kitchen, with my copper pots and the antique gold hardware. Would that be too much? Maybe I can find a picture that shows mixed metals.” I pulled out my house binder to study my kitchen inspiration photos one more time. Low and behold, even though I had never noticed it before, there sat a stainless-steel range, with copper pots hanging overhead, and antique gold hardware on the cabinets.

“Well, would you look at that? I’ve never noticed that. Stainless would work perfectly.”

“I think it would, darling.”

I closed my eyes. Thank you Father, my heart whispered.

I’ve got you, He whispered back.

I got home and collapsed on the outside patio where Philly sat on the sofa working. “Did you know picking out appliances was exhausting?”

He shook his head and pecked away.

“Can I just show you these two ranges and you tell me what you like?”

I showed him the black one and the stainless one and in nothing short of ten seconds he said, “Stainless. No doubt.”

I raised my right eyebrow at him and shut the book. Stainless it will be. 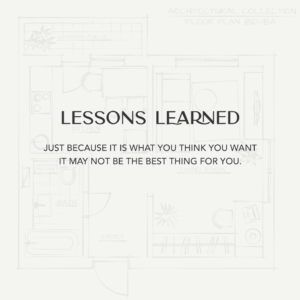 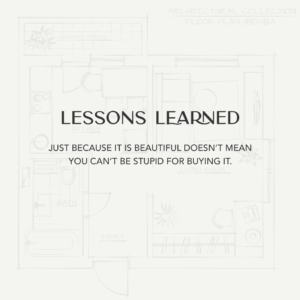