The Architect & Me – Part 8: Every Place Your Foot Touches 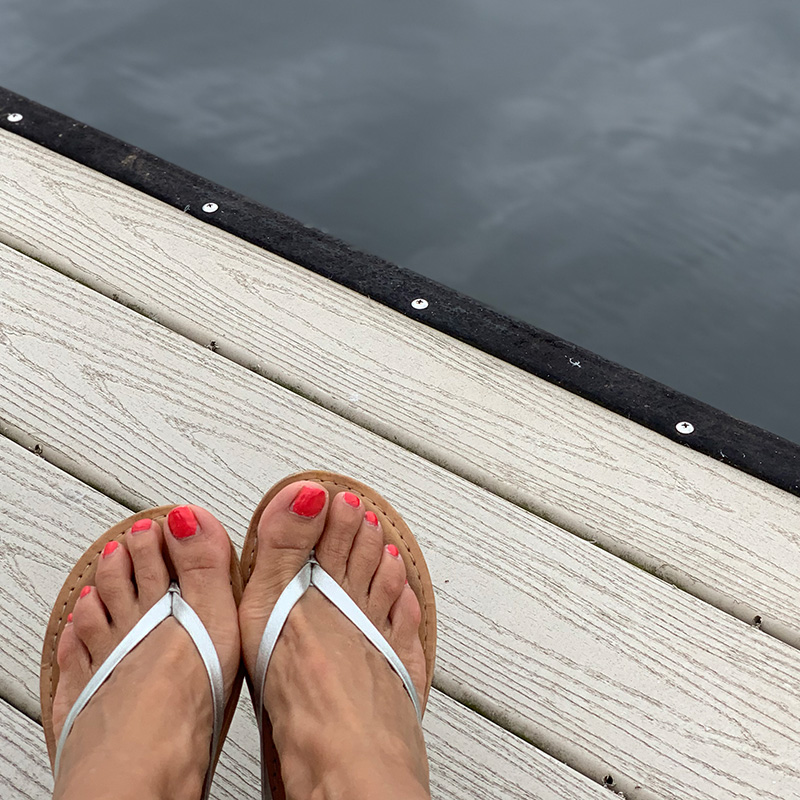 It was our first family vacation as the newly formed and very messy Joneses. We didn’t know if we’d be able to afford a vacation. But a few months after we married, I was offered a new book deal. We decided we’d set aside some of that money to take the kids away for a week. I had been spending time in Seaside, Florida for almost twenty years at that point, and every time I went, childless, and would watch the families with their kids, my heart ached to one day be able to bring my own. So, to Seaside we would go.

We looked like the Clampetts. (If you are too young to know who they are, google them and listen to the theme song. Iconic!) The back of the car was loaded with 80% of our groceries for the week, because I was such a couponer that I had planned for a month to make sure we had the food we would need. Then, I had bought these five-dollar beach towels at Walmart. It was when plush monogrammed towels were making big strides. My bonus kids had some at their mom’s that they had brought to our house a time or two. So, I tried to apply the iron-on letters to their towels as make-shift monograms because I wanted them to be nice for them. It was an epic failure on the monogram, even though to this day, over a decade later, a few pitiful letters are still hanging on. Some things refuse to let go…

To be honest, I’ve blocked out a lot of those early years of our marriage. I had no idea how hard entering a world not your own would be. But one thing I do remember is a moment from that trip. I’m not sure where I had gone, I might have given myself a time-out. But I had been gone long enough for them to dig a ginormous hole in the middle of the sand by our chairs. I was walking with a Coke in my hand (my survival drug of choice) and looking out at the water trying to see where they were. So, I never saw the two-foot by two-foot hole. My left foot went first, and my right foot followed. The jolt and pain were immediate. I let out a cry and sat on the edge of the hole unable to move. I was certain I had broken both of my ankles. A couple behind the hole ran over. The pain was so searing I could hardly speak…

My mind was pulsating with the pain of two things:

Two, “We have our VBS for women event in two weeks and I’m going to be teaching from a wheelchair.” 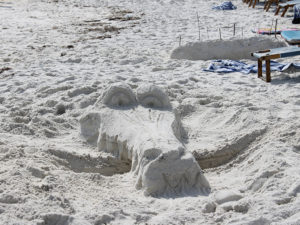 As I sat there, I truly felt like this was a spiritual attack on my feet. My feet were what carried me to teach and speak the Good News of the Gospel of Jesus Christ. (Back then zoom was a word used only by photographers.) It may sound silly, but more than any other place on my body my feet get injured. Right after this injury I would fracture a bone in my foot by simply stepping down out of the car to head into the church. Yet this doesn’t take into account the number of times I have hit my toes to the point they swell and make it difficult to put on closed-toed shoes. Or the things that would happen to them while we were building our home which I’ll save for another telling.

But one day, a very significant day, God gave me another message for my feet.

“This could be the one,” the subject line read in my inbox. It was from Philly. 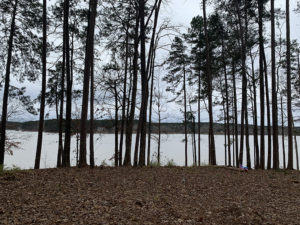 I opened it and it was a video of a lakefront property. It was beautiful. We had just sold our home and were packing to downsize so that we could begin saving towards a lake house in the future. We had two desires for that home. First, that it would be a place we could hold the ministry’s weekend retreats so hearts and families could heal; and second, that it would be a place that would continue to bring healing to our own.

Surrendering my non-existent beach house all those many years ago opened my heart to consider the lake instead. This same lake that held more memories for our family than any other place. Philly and I had honeymooned there. We’d brought our parents for their Christmas gifts. Celebrated birthdays. Family vacations. Came to get away during our hardest season as a couple. This lake held a chunk of our hearts, and it also would get both of us closer to our aging parents, which the last few years had shown was needed.

Philly and I had played out multiple scenarios in our heads of how we might be able to afford to do this in the next ten years. You know how you do that? “Well, if this happened then maybe we could do this? Or if this happened maybe we could do that?” But there are moments when God shows up in ways our earthly minds cannot imagine. Remember, “I can do exceedingly, abundantly above all that you can ask or imagine.” Well even though I write novels full of imaginary tales, I didn’t have the ability to play out the scenario that would make this dream a possibility. But He had. And now Philly was looking at lots.

I walked to the back porch where he was sitting in a rocker still looking at the property. “Babe, we need to go see this tomorrow.”

I gave him a Sophie look. “Are you crazy?” I was in the throes of packing an entire home. No sane person leaves their home for a couple days when they are moving.

“And I’m telling you there is no way I can leave town when I am up to my eyeballs in bubble wrap and china.”

“We will go up and come right back.”

I could feel my resistance weakening. “Seriously? Now?”

“If we do, it isn’t ours.” I truly believed this. It had just been proven with the house we had just purchased. Perfect house. We were going to make an offer that day. Got bought out from under us. COVID hit. Buyer freaked. We snagged it. My resolve liquified. “But if you think we need to go, we’ll go.”

Off we went. Arriving at the tree covered lot, a small makeshift road allowed us to pull down a little closer to the point. We stepped out and navigated the brush, but even amidst the foliage the view refused to be missed. It was breathtaking. Full lake view on two sides and a cove on the other. Our hearts beat a little faster. Our words gone. We just took it in.

It had been purchased a few years earlier by a couple from out of state, so the dock was already built, and the sea wall was complete. The real estate agent told us that once the “fourteen days to slow the spread” that turned into “fourteen more days to slow the spread” had lifted, people had fled big cities, and lots were selling at record pace. That would not have made our decision. We wanted the Lord to make our decision. We told the agent we’d connect again the next day. 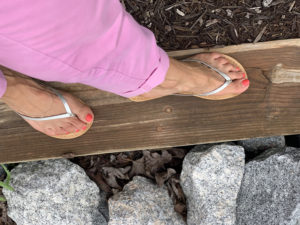 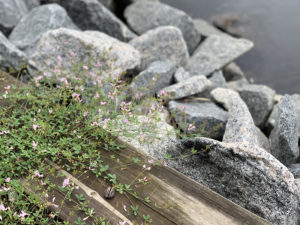 The dock provided a gift. Two Adirondack chairs. It was as if they had been set up just for us to sit a spell and hear what God was saying. We sat on the dock that evening and took in the sunset. As we did, we prayed. The next morning, we were there before sunrise. As it took its place so did our prayers. At one point I got up to walk the perimeter of the sea wall. A simple act to take it in from all sides. But the wall was narrow so as I walked, I looked down at my feet.

That is when God spoke something different than He has ever spoken as I’ve looked at my feet. “Every place the sole of your foot touches is the land I have given you.” It was as clear and loud in my Spirit as if the lake were a roaring ocean. It wasn’t conjured. Forced. It was just spoken. I was looking at my freshly pink painted toes and there came the words spoken to Joshua almost six thousand years ago as he had just entered a land that had been surrounded by a wall. Now, they were being spoken to me.

I sat down quietly in the chair and looked up the passage.

“After the death of Moses, the servant of the Lord, the Lord said to Joshua son of Nun, Moses’ aide: ‘Moses my servant is dead. Now then, you and all these people, get ready to cross the Jordan River into the land I am about to give to them—to the Israelites. I will give you every place where you set your foot, as I promised Moses. Your territory will extend from the desert to Lebanon, and from the great river, the Euphrates—all the Hittite country—to the Mediterranean Sea in the west. No one will be able to stand against you all the days of your life. As I was with Moses, so I will be with you; I will never leave you nor forsake you. Be strong and courageous, because you will lead these people to inherit the land I swore to their ancestors to give them.”

“Be strong and very courageous. Be careful to obey all the law my servant Moses gave you; do not turn from it to the right or to the left, that you may be successful wherever you go. Keep this Book of the Law always on your lips; meditate on it day and night, so that you may be careful to do everything written in it. Then you will be prosperous and successful. Have I not commanded you? Be strong and courageous. Do not be afraid; do not be discouraged, for the Lord your God will be with you wherever you go.”

“So, Joshua ordered the officers of the people: ‘Go through the camp and tell the people, get your provisions ready. Three days from now you will cross the Jordan here to go in and take possession of the land the Lord your God is giving you for your own.’”

My heart settled into the details of this passage. First, there were so many references to water. Then the passages, “The land I have given you.”

“God is giving you for your own.”

“Do not be afraid. God is with you wherever you go.”

But the one that stuck out to me the most was, “Be strong and courageous, because you will lead these people to inherit the land I swore to their ancestors to give them.” By our possession of this land I believed God was going to allow us to help other people possess the land He had so long desired to give to them. How holy. How could I ask for more?

My feet had taken a lot of steps of faith before. Moving to Nashville. Leaving my marriage. Walking away from a book deal. Giving when we didn’t have it to give. Marrying Philly. But this may very well be the biggest one. I did not realize in that moment how many times I would ask the Lord if we had heard Him correctly. Nor did I realize how many times He would graciously assure me that we had. 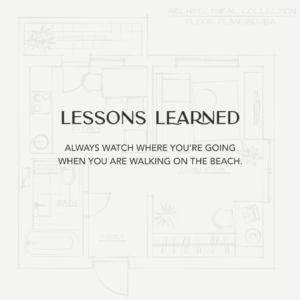